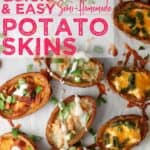 Quick and Easy Loaded Potato Skins made three ways!  Perfect for game day or a Super bowl party.  The secret to this easy appetizer is in the potato!

I've said it before... potatoes are my love language. I can give up gluten... not potatoes. These loaded potato skins would be great for your next game day party, especially alongside these awesome wings! I made them three ways; traditional cheddar & bacon, buffalo chicken style, and jalapeño popper. All of which were seriously good! Not to mention, this trio of loaded potato skins is brought to you by a sneaky little hack that makes these one of the quickest and easiest appetizers you'll ever make!

Potato skins are traditionally kind of a hassle to make! You've got to bake the potato, let it cool, scoop out the insides, bake it again, fill it with stuff, and then bake them again. I mean who has time for that?! Not me, that's for sure! That's why I've been using this semi-homemade trick! Enter:

Naked potato skins! You can find them in the freezer section at Kroger! I found these guys a while ago and it's been a potato skin frenzy in our house ever since. They are real potatoes, prepped, frozen, and ready to be loaded. All you have to do is pre-bake them, fill them, and bake again. It saves so much time and effort!

So we have the potato part covered and I'm super pumped about that sneaky hack. When it comes to the filling, you can use whatever want! Stuff them with cheeses, bacon, pizza toppings... anything that sounds good! I made three versions:

For the buffalo chicken, I used the Instant Pot and followed what I did in this Buffalo Chicken Salad recipe. Here's the gist though:

All in all this appetizer comes together in under 30 minutes! I like keeping a box of these naked potato skins stashed in the freezer. When the need strikes, you've got all you need for a quick lunch or easy appetizer! 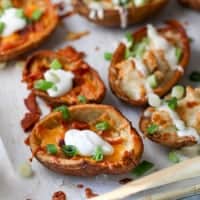 Calories: 145kcal
Tried this recipe?Leave a comment and star rating below!