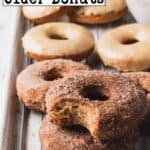 Get your fix of fall with these tender gluten-free apple cider donuts! They are baked, not fried, which means they're easy to make! You can choose to eat them plain, with the traditional cinnamon-sugar topping, or a sweet maple glaze!

I live in the midwest and visiting the apple orchard in the fall is peak midwesterner. If you're gluten-free though, it's also agonizing! The smell of those freshly cooked apple cider donuts is quite intoxicating and if you can't eat them, also quite depressing!

In thinking about those delightful orchard donuts, I remember them to be light and soft. They were always full of warm cinnamon spice and apple flavor. Oh, and that crunchy cinnamon-sugar coating? So delightful.

This recipe went through many trials to get it just right. At first, the donuts were a little dense, which sucked up all the flavor, then they were not dense enough! They rose and then fell completely flat in the donut pan. #bakingfail. Then, just like Goldilocks, I landed on a ratio of ingredients that was just right resulting in a tender cake-like donut that didn't skimp on apple cider flavor!

Yes, regular apple cider is naturally gluten-free but it is always a good idea to double-check labels before purchasing!

To get maximum apple cider flavor in your apple cider donuts, it all starts with boiled cider! You boil the cider to reduce the water content which concentrates the apple flavor. The cider gets a little thicker and slightly syrupy.

To make boiled cider, simply boil apple cider in a pan until it reduces by half.

I start with about 8 cups of cider and boil it down until I have 4 cups left. If you have a pan with cup markings on the side, go by those, or you can eyeball it.

There is no specific amount of time this takes. It's best to boil the cider until it has reduced the proper amount rather than worry about how long it should take.

Once boiled, cool the cider before making these donuts.

Refrigerate leftover boiled cider for up to 1 week or freeze it and keep on hand for apple cider donuts all throughout the year! (This is why I start with 8 cups. Or you can just start with the 1 cup the recipe calls for.)

If you're craving a donut for breakfast, you definitely don't want a complicated recipe. Who has the time for that? Lucky for you, this recipe is about as easy as it gets!

Really these donuts are good all on their own, but to make them just like the orchard, you must coat them in cinnamon sugar!

To do this, dip the donuts in melted butter first, then into the cinnamon-sugar mixture.

If you want to give these donuts a twist, then try out the maple glaze! It's easy to whip up and tastes great too!

Whisk together the glaze ingredients. Then, dip the warm donuts in the glaze. The glaze will set up once it cools.

Side note: While I thought the donuts with glaze were delicious, the maple flavor did detract from the apple just a bit. So if you want to savor all that apple flavor, stick with cinnamon-sugar!

These donuts are best when eaten fresh. Store at room temperature for up to 3 days. Donuts can be frozen if desired.

If you need another excuse to buy that donut pan (wink, wink), check out these two-ingredient bagels! It's another very easy and very popular recipe here on the blog!

I would love to hear from you! If you make these donuts or have questions, drop a comment and star-rating down below! Happy Baking! ♡ 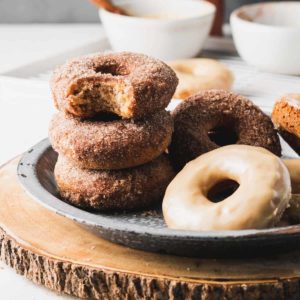 Donuts are best fresh. Store at room temperature for up to 3 days. Can freeze if desired. Boiled cider can be made ahead and refrigerated for up to 1 week. Freeze leftover boiled cider for donuts later.