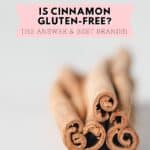 Cinnamon is a common baking spice known for its warm fragrance. Whether ground or in whole sticks, this versatile spice is often found in both sweet and savory dishes. But, is cinnamon gluten-free? Find the quick answer to this and more below!

Cinnamon is a beloved ingredient used in many dishes and baked goods. It adds warmth and sweet fragrance to many recipes including delicious gluten-free cinnamon rolls, sweet potato casserole, graham crackers, oatmeal cookies, and even your favorite pumpkin spiced coffee.

Regardless of the species, these trees are not a cereal grain, like wheat, barley, or rye, and they do not contain the gluten protein.

How Do I Know if Cinnamon is Gluten-Free?

Even though cinnamon is naturally gluten-free, you must still consider a few details when it comes to which cinnamon to use or buy. Mostly this centers around manufacturing practices. Here's what to look for at the grocery store.

What are Anti-Caking Agents?

Anti-caking agents are anhydrous compounds added in small amounts to dry foods to prevent the product from clumping together which ensures it remains dry and free-flowing.

One such agent is Silicon dioxide (Silica), a mineral that is derived from quartz. It is often added to spices as it is one of the most effective anti-caking agents.

Is Wheat Used as an Anti-Caking Agent?

Since wheat is a top 8 allergen, if it were to be used as an anti-caking agent, that would have to be declared in the ingredient list and in an allergen statement to be in compliance with the FDA's allergen labeling laws.

What Brand of Cinnamon is Gluten-Free?

While McCormick cinnamon is not labeled gluten-free, McCormick will always declare sources of gluten (including wheat, barley, rye, oats, spelt, triticale, and kamut) in the ingredient statement, they will never be hidden under the notations of "spices" or "natural flavors." McCormick facilities also have allergen programs in place to minimize cross-contact of ingredients.

According to an email from B&G foods, the parent company, they do not maintain a list of gluten-free spices nor are they currently testing for gluten. Single ingredient spices are inherently gluten-free. They stated they have a strong allergen policy to ensure there is no allergen cross-contamination in their manufacturing facilities. They advise to always check labels on specific products for current ingredient and allergen information.

Yes. According to an email from Penzy's, all products, except Fenugreek Seed, are naturally gluten free and meet the FDA requirements for gluten.

Penzey's does not add gluten (or any items containing gluten) to any products, and will not package any items if they are found to contain gluten outside the FDA standards.

Cinnamon is naturally gluten-free. Ground cinnamon and cinnamon sticks are generally safe to consume, provided a check of the label for any added gluten ingredients or allergen statements.

More Is It Gluten-Free? Articles

If you enjoyed this article, check out these similar articles below! You never know what you'll learn!

Thank you for reading! If you liked this article, be sure to check out other "is it gluten-free?" articles!

If you enjoyed this article, let me know in the comments!
Thank you for your support! ♡

Disclaimer: The information in this article is the personal opinion of the author and is not medical or nutritional advice. Please consult a doctor or medical professional before making changes to your diet or regarding any health related decisions. Ingredient information was accurate at the time of posting but should always be verified by the consumer by checking the product ingredient label for the most up to date information.

I’m Katie, the blogger behind Wheat by the Wayside. I was diagnosed with Celiac Disease in 2018 and have been following a strict gluten-free diet ever since. The goal of WBTW is to share tried and tested, easy, and delicious gluten-free recipes to give you confidence in the kitchen! Learn more →